Today, exactly 214 years ago, the Frenchman Louis Braille was born. As a child he had an accident that left him blind. While growing up, he realized that the means of communication available to the blind were not good enough. He therefore began to develop his own system with a kind of alphabet that could used by blind people, like himself, for both reading and writing. At the age of 15, he was able to present this system to the outside world. The system was named after him and today, Braille is widely used all over the world. In recent years the system has been refined and simplified, but the basis remains the same.

On this day, World Braille Day, we are reminded of the importance of independence and accessibility for people who are blind or visually impaired. This is also why we are continuously and constantly working to develop products that simplify everyday life for people with impaired vision.

Learn more about our products. 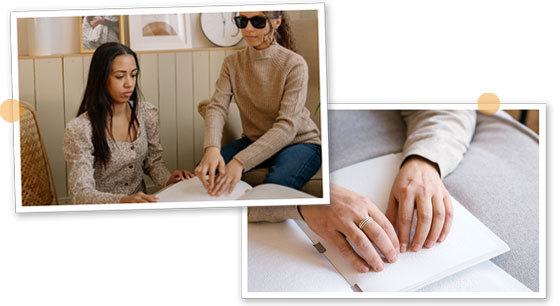 How does Braille work?

The system that Louis Braille developed is a type of writing that can be identified by feeling. Each letter consists of one or more raised dots within a certain, limited area. Within this area, called cell, there are six points distributed in two columns and three rows. By combining the points according to a system within the cell, 63 different characters can be formed (in computer use, eight points are used, which enables 255 different combinations).

With the help of a special numeric character, not only letters but also numbers can be entered in Braille. The characters are read by moving the fingers over the braille cells and decoded with the so-called finger flower, which sits on the outermost part of the finger.

Braille works on paper, but there are also electronic Braille displays that can be connected to a computer and used for both reading and writing.

you are being redirected to "Company/Organization". if you have items in the cart, they will be removed. do you want to continue?

Welcome to receive a free quotation without obligation.